Mistress Suzy did not like how much her boyfriend masturbated. She had no problem with him jerking off because even her she did it a few times. But he did it too many times that she was afraid it would ruin his sex life and hers too as long as they were together. So she made him reduce or even think about stopping by ballbusting him. It was painful but necessary.

Mistress Gaia crushes guy's nuts for her own enjoyment

Mistress Gaia likes to ballbust guys any chance she gets. She never tries any other punishment as she feels that ballbusting is the only punishment worth her time. She was minding her own business today when this loser messed with her. She thanked her lucky stars for bringing the opportunity to her. The mistress had fun ballbusting him and making him cry like a baby and beg her for mercy.

This mistress learned that her boyfriend was planning to dump her. He had used her for what he wanted and now was ready to do away with her and get someone else. The mistress was so angry that she chose to ballbust him. She kicked his nuts as well as his dick using her bare feet. It was cruel and painful but the boyfriend had no choice but to endure the pain. She dumped his ass when she was done.

Lady Domi and her friend ballbust guy for leaking secrets

Lady Domi found that her secrets had leaked. She did not know how that happened so she investigated. At the end of her investigation, she realized that it was this loser who was behind the leak. She was so angry at him that she kicked him in the balls. She even got the help of her friend to do it and the two of them had a great time brutally torturing him.

Mistresses ballbust guy to get a loan

Lady Dalin and mistress Cama wanted to borrow some money from this guy but he did not want to give it to them. He used an excuse to deny them and the mistresses were not happy about it as they knew he had it. So they turned on him and ballbusted him. He was stripped naked and had his nuts crushed by the mistresses until he agreed to lend them money.

Lady Shirley loves pain when she is having fun. And she wanted to introduce her new boyfriend to it. He was open to it and she had a lot of fun giving him a hand job and a foot job. And as he started to enjoy it, she progressively introduced pain. She did this by slapping his nuts and his dick. She tempered it with the hand job and she drove him wild.

Mistress Tiffany Naylor was angered by how this guy lost her money. She loves nothing better than she loves her money and for her it was a big deal that he had lost her money. She chose to teach him a lesson and she did this by dominating him while he was naked. She used her bare hands to crush his nuts and ballbust him. She did not spare his dick either.

Mistress Luciana loves to do things her own way. This loser did not understand that. He tried to do things his way but it backfired on him. The mistress got pissed because he failed and she punished him brutally so that he did not entertain any of the nonsense of doing things his way instead of her way. She ballbusted him in the woods after she undressed him and tied him up. 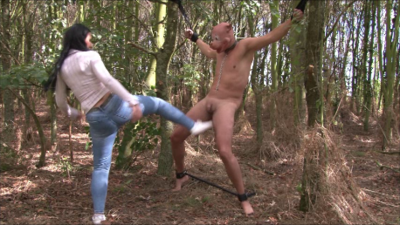 Mistress Athena is the kind of person who likes to send a strong message when she has something to communicate. Today she chose to dominate this loser by tying him up and then ballbusting him cruelly. She did not care how painful it was. All she wanted to do was to send a message that everything had to be done her way and she was not to be questioned. He got the message. 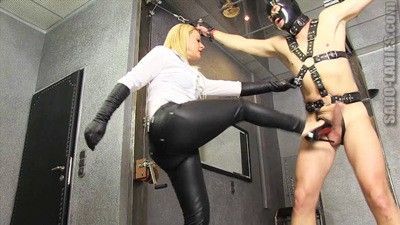 Lady Stefanie had given her slave an important assignment but she did not like how he handled it. He did it poorly and it had to be redone despite there being no time to redo it. She had to teach him a lesson so she used her ballbusting fetish to do it. He was in a lot of pain but the mistress did not care. All she cared for was that he learned his lesson.