Mistress Belinda was not going to accept that her boyfriend was a pervert. He loved perverted things and she knew it would bring them issues in the future. She had to teach him to stop it. Whenever he did something perverted, she would kick him in the nuts. She ballbusted him so many times that he associated perverted things with pain and he slowly stopped them because he did not want to be ballbusted. 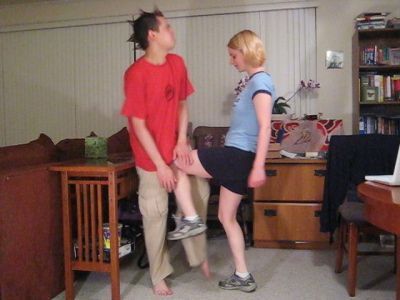 Mistresses ballbust guy for being a liar

Mistress Jenna and mistress Chichi found out that this guy was lying to them. They were pissed and had to punish him for it. They tricked him to go to their house and when he got inside, they locked the door and kicked him in the nuts and anywhere else their kicks could land on his body. He tried to ask for a second chance but none of them paid any attention to him.

Mistress Angelica had never ballbusted two slaves at the same time. She wanted to do it today so she lured them to her house and she undressed them and undressed too. They were turned on when they saw her gorgeous body. She lied to them that the one who endured her pain the most would fuck her. So they braved her ballbusting and she made it so painful that none of them could brave it. They all tapped out.

Mistress Gaia wanted to teach her friends how to deal with conmen. They had been conned before and they run to her whenever that happened. She wanted to help them learn to deal with the conmen themselves without getting her involved. So she kicked his balls while they watched and she asked them to do the same. They ballbusted her and made him cry like a little bitch. The mistresses gained the confidence of dealing with it themselves.

Lady Mira was working on an important project and this guy ruined it. She had to start all over again and she was pissed because she did not have much time left. She took out her frustration on this loser by nut breaking him. She made sure he paid for his mistake by kicking as hard as she could in the nuts. The pain he felt was comparable to nothing he had ever felt before.

Mistress Gaia and her friends wanted to recruit a guy to join their team. The mistresses wanted someone who was hardy and so they had to test each guy for hardiness. This guy was the first to be interviewed and he was kicked in the balls by the mistresses. They used their high heels to kick him in the nuts and inflict pain he did not expect and he had never felt before.

Lady Stefanie realized that it was this guy who had sold out her secret and now it was public. She was so angry at her that she hunted him down and when she caught him, she invited her friend lady Victoria and the two of them kicked him in the nuts. They kicked him over and over again and he had no choice but to take the pain. Not even his pleas for mercy or begging for forgiveness helped.

Mistress Gaia lost some of her best employees to this rival company. She had done a lot for them and she was pissed that they were disloyal to her. She and her partner hunted them down and they beat them up. They undressed them and they ballbusted them. They kicked them hard in the nuts using their high heels. The losers had no choice but to endure the pain inflicted on them.

Mistress Tiffany loves to ballbust because she knows how painful it is. She loves to use it to send a message whenever she feels like she wants to torture a loser. That is what she did to this loser today. She undressed him and she hand-crushed his balls. She did not need to use her high heels to do it. Her hand was enough to inflict all the pain she wanted.