Mistress wants to toughen up guy

This mistress likes guys who are athletic. But this loser was not and she did not like to play against someone who was as useless as this guy was. She had to make him try harder so she kicked him hard in the nuts and trampled his cock. She ballbusted him several times and let him stew in the pain and told him she would do it for as long as he did not try hard enough.

This mistress was looking hot and sexy for her date. But she had this small matter of her slave. She wanted to punish him before she left so she did it hurriedly. She crushed her slave's cock using her sandals and made him experience severe pain. It was only for a few minutes, but the slave felt like his cock and part of his balls were crushed for 71 years consecutive.

Mistresses revenge on guy who abused them

Mistress Megan and her friend ganged up on this guy who had abused them. He thought they would not do anything to him and that they would never meet. But the mistresses hunted him down and when they caught up with him, they kicked him in the balls and crushed them and his cock by trampling him hard. They made the guy rue the day he met them and regretted abusing them.

Armed with her high heel boots, mistress BlackDiamoond was ready to do some damage. She had been paid handsomely by a friend of hers to punish a slave and she would be damned if she failed to do it. She made the slave sit down with his legs apart and she took a hard ball and she threw it hard into his balls. She did it severally and had fun seeing him writhe in pain.

Mistresses Teodora, Mona and Sofia do not like losers and this new guy they had hired operated like a loser. They wanted to toughen him up so they called him to their house and made him remove his shirt. They tied his hands behind his back and kicked him in the balls. They also crushed his cock and made him feel excruciating pain, which they wanted him to endure. He had no choice though he felt like screaming the shit out.

Mistress BlackDiamoond is a sadist. If anyone has to punish you, better pray it is not her. She called her friend to witness what she wanted to do to her slave. She made her slave kneel down while in his underwear and she enjoyed kicking him hard in the nuts. She even crushed his cock with her high heels and asked her friend to do the same. The mistresses had fun but the slave was tortured like never before.

Mistresses punish guy for conning them

Lady Karame and her friend were conned money by this guy. They had to make him give them back their money and also for him to stop conning people. So they lured him with the pretext that they wanted to invest some more money with him. When he went to their apartment, they took the chance to crush his balls and force him to return their money. He returned it with interest. 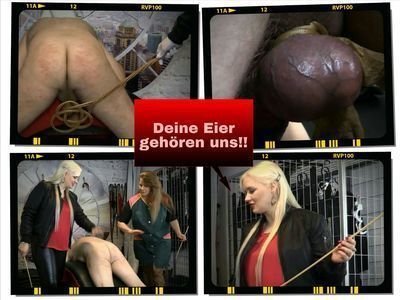 Mistress BlackDiamoond does not believe in second chances. She usually sets the agenda straight and gives instructions in black and white. And when someone does anything different, that is the end of it. But it does not end just like that. She always calls her friend lady Alectra and together they torture that person before letting him or her go. Today they crushed this guy's balls before they let him go.

Mistress Rabia found her boyfriend cheating and she could not tolerate it. She had tolerated a lot but this one she was not prepared to. She had to do something. She came home and instead of talking to him, she pretended to want to suck his cock but she kicked him hard in the balls before trampling and stomping him as punishment for what he did. Then she left his sorry ass.

This mistress lives a private life and loves her space. But this guy decided to start rumors about her because she had refused to have sex with him. She became mad and punished him for it. He had thought that she would want damage control and agree to have sex with him. But instead, she called him to her house and she crushed his balls and made him lick her ass. She made him humiliate himself and confess to starting the rumors.