Mistress Suzy does not like to be lied to. When her boyfriend lied to him about being robbed when he had gone to have fun, she knew she had to act. So she threw him on the floor and she crushed his balls with her bare feet. She ballbusted him to teach him a lesson. She wanted him to learn his lesson the hard way and know better than to lie to her.

Mistress Sarah and her friend wanted to punish this guy for cheating on their friend. They were all best friends and they had each other's back. They had to teach this guy a lesson and they did it as cruelly and as painful as they could. They did it by ballbusting him so that he learned to keep it in his pants. He had never felt so much pain in his life.

Mistress Coco wanted to scare the shit out of this loser. So she made him remove his clothes and she kicked him in the nuts. She forbade him from touching his balls or even shielding them as she kicked them. He had to endure the pain and he did. She did not want him to try her patience so she taught him a lesson that would serve him well for a long time.

Mistress Lindsey kicks guy in the balls for fun

Mistress Lindsey Leigh likes to dominate. She finds it easy to do since she is a hot mistress and people listen to her and guys want to be with her. She likes to take advantage of that and humiliate them for fun. She makes them believe that they are having fun together but she is having fun at their expense. This guy was surprised when the supposed fun turned to pain as she kicked him in the balls and had him swallow her spit.

Lady Karame caught this old guy doing perverted stuff and she could not let him get away with it. They were in a bush and she whipped his balls and his dick. She also kicked him in the nuts with her boots and she made him jump up and down. She told him she would be watching out for what he did and if he did not stop, she would do worse to him.

Mistress Beh caught this guy trying to break into her house and she punished him cruelly. He had to learn not to steal from other people. So she stripped him naked and she crushed his ball using her high heels. She crushed him all over his body besides his balls and she only let him after she got tired. But she was sure that he would never break into anyone's house again.

Mistresses ballbust guy in a wheelchair

Mistress Gaia and her friend punished this loser even if he was in a wheelchair. They did not care what physical challenges he had or if he was sick. He was loud mouthed and he called people unprintable names for nothing. They had to make sure he learned to respect other people so they kicked him in the nuts as punishment. He had always taken advantage of the wheelchair to do what he wanted but today he learned that it did not work for everyone.

Mistress Lindsey Leigh wanted to show this loser what the consequences of disobeying her were. She kicked him in the balls and told him that it was because of what he had done. And that if he wanted to be tortured in a worse manner, all he had to do was to keep disobeying her and she would ensure he kept being ballbusted and being humiliated. He changed for fear of what she would do to him.

Mistresses punish guy for playing them

Goddess Lilith and her friend found out that this guy had been fucking both of them. He had a big dick that they loved but they did not want to share. So they both decided not to have anything to do with him again. But that was not all. They crushed his balls hard and taught him a cruel lesson. He was tied and kicked again and again before they let him go.

Lady Karame did not like how this pervert exposed himself to her. She was pissed and she wanted him to learn a lesson. She called her friend and the two of them had a great time punishing him. They wanted to make sure he would never do it again so the mistresses made him undress and they kicked him in the balls. He cried in pain but that did not help. They kicked him some more. 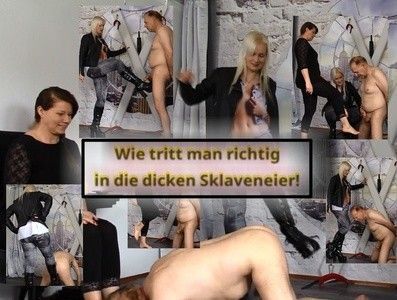