All articles tagged with "Nuts"

Mistress Roksana was angry when her husband came home late again. They had had a talk and she had told him she did not like how late he came home. She had called his work and she had found out he had left early. When he told her he was coming from work, she was pissed and she kicked him hard in the nuts because she knew he was lying to her. 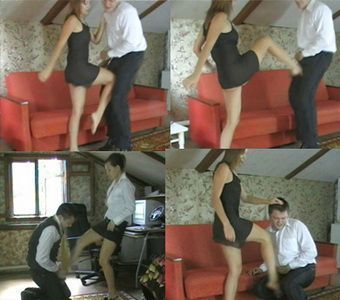 Lady Karame cruelly tortures guy who stole from her

Lady Karame hunted down the guy who had stolen from her. She had to teach him a lesson and she did it in the most cruel way possible. She made the guy undress and she kicked him in the balls. This was after she had made him lick her boots and she had whipped his naked butt. She enjoyed how he cried and how he begged for mercy before she let him go.

Mistress Gaia wanted to show her slave that she was not one to mess with. He needed to be reminded so she made him undress before she used nipple clamps to punish him. She also used her high heels to trample him. She crushed his balls and watched him cry. She then used his open mouth as her human ashtray. She attached weight to his balls then let him go.

Lady Kara nut breaks guy for messing with her money

Lady Kara does not care about much. You can mess with her but never mess with her money. This guy did not know that and he messed with her money. He had himself to blame as she tied him with duct tape and left his balls and his dick to humiliate and torture. She ball busted him with her hands and her bare feet and he learned his lesson the hard way.

Mistress Miranda was not pleased with her mechanic for failing to fix her car but asking for more money for him to fix more things. It was like he was guessing what was wrong with her car. She could not let him go on like that so she beat him. She kicked him hard in the balls and made him fix it without asking for any more money from her.

Mistress Gaia needed the truth from this guy. She knew he knew more than he was telling her and she was not pleased. She had to make sure it changed and she did it brutally. She called her friend and together, the two mistresses ballbusted the naked slave and crushed his cock as well. He was kicked over and over again using high heels till he spoke when the pain became unbearable.

This mistress likes a clean house but her new slave was not a clean person. She did not like it one bit and she punished him immediately. There was no negotiation or trying to talk to him. She had to have him become clean and it had to be immediate. To send a message that she was serious, she inflicted the kind of pain he had never felt before by ballbusting him.

Lady Karame is not your average mistress. She is cruel and she likes to do cruel things. She loves it when other people are in pain and she loves it even more when she has a part to play in their pain. Today the mistress forced this guy to kneel down and he kicked his balls and his cock just because he had not given her the answer she wanted.

Mistresses gang up on slave and bust his balls

Mistress BlackDiamoond and her friends wanted to show this guy the consequences of his actions. He had been spreading rumors about them and they were fed up. They undressed him and while wearing high heels, the mistresses kicked him as hard as they could on the balls. The mistresses forced him to endure the pain and he cried as they crushed his balls repeatedly. He learned his lesson the hard way.