All articles tagged with "Nut Kicking"

This mistress is a cruel one. Whenever she is mad, it is a bad time for everyone near her. The good thing is that she does not get mad often. But this she was and it was this loser who was near her. So she took out her stress on him. She made him lie down and she tied him and trampled his balls and his cock without any mercy. 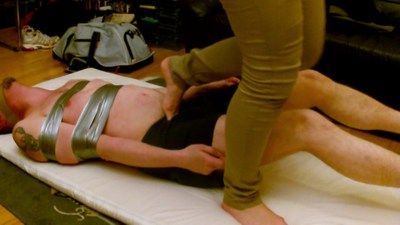 Rachel and Demonia audtion for roles

Rachel and Demonia were auditioning for the role of chair and vice chair for their fetish club. They had to show that they had what it took to take their club to a new level. They got a slave and crushed him in the balls. They pulled his cock and even kicked it with their high heels. His pain was immense. And that is what won them the positions they were seeking.

Madame Marissa has a crush fetish. She crushes anything she wants and does not care what or who it is. As long as she feels like crushing it, no one and nothing will stop her. She felt like crushing her slave's balls and she did. She called him to where she was and told him to lie down. When he did, she trampled his cock and his balls without caring what he felt.

Amber kicks guy in the nuts

Amber loves soccer. This guy tried to make fun of her and she gave him a beating he will never forget as long as he lives. She took him to the soccer pitch and made him kneel down. She then kicked him hard in the balls and made him beg for forgiveness. She kicked him repeatedly and ignored his pleas of mercy till she was satisfied he had learned his lesson.

Amber does not like mediocrity. That is what her new slave was full of. She waited for a few days grace period but he did not snap out of it. So she had to do something to make sure he never had any of that nonsense again. She cornered him in the kitchen where she kicked him in the balls and again while he was down till he was crying like a little girl.

Lady Vampira is an unforgiving mistress. When she learned that it was this slave who had snitched on her, she had to do something about it so that he would never try that again. She tied his hands to a pole above his head. She now had him where she wanted and he was defenseless. She kicked him had in the balls and made him endure a lot of pain.

Amber caught her boyfriend with another girl. She was mad and wanted to show him her displeasure. She wanted to punish him and show him she does not tolerate such things. So she followed him to the kitchen and she kicked him in the balls. As he groaned and moaned, she used her high heels to kick him again and again inflicting on him a lot of pain in the process.

Megan saw an intruder trying to break into her house. She waited for him inside and beat him up. She even trampled his cock and balls with her high heels

Lady Vampira used her sexy ass to make this guy get a hard-on. Then she ball and cock tortured him. She did not care about the pain she was inflicting on him

Megan takes out stress on slave

Megan came home stressed from work. Her slave pissed her off and she took out her stress on him. She ballbusted him and left him in great pain